The Chamber of Commerce's task is to promote commercial and industrial relations, as well as cooperation in research, education and technology between Norway and Slovakia. The interests of the business community must also be safeguarded in relation to the Norwegian and Slovak authorities. This is done by creating arenas for dialogue, networking and professional replenishment. The Norwegian Slovak Chamber of Commerce is an association, based in Oslo.

BODIES OF THE CHAMBER OF COMMERCE

The Chamber of Commerce is organized as an association in Norway. The President of the Chamber of Commerce leads the day-to-day operations. The Norwegian Slovak Chamber of Commerce, established on 17 May 2020, is an independent legal entity with limited liability. The organization owns its own deposit capital, which is mainly based on paid dues and service fees from the members, as well as grants from external partners. Only NSHK itself has the right to dispose of the contributed capital. NSHK does not have acquisitions as its purpose.

BOARD OF THE NORWEGIAN SLOVAK CHAMBER OF COMMERCE 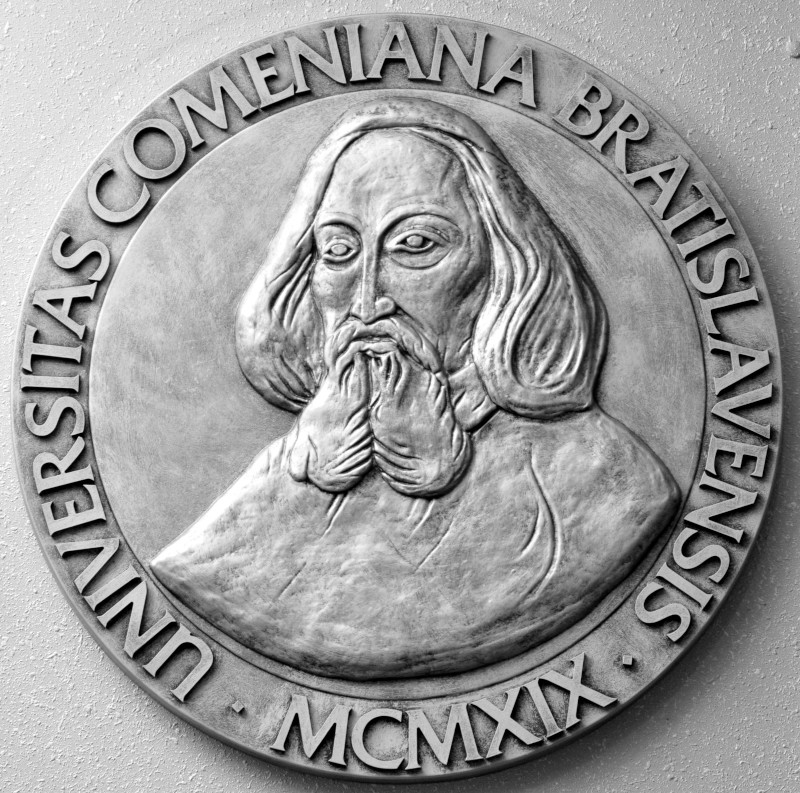 Every year, in the months of June to August, the admission procedure for the Jessenius Faculty of Medicine at the Comenius University in Martin and for the University of Veterinary Medicine and Pharmacy in Košice takes place. There is great interest in these studies in Norway, partly due to the more than 20-year-old tradition of Norwegian-Slovak academic cooperation, but above all due to the high quality of education.

The starting point of the project

In Norway, as in Slovakia, a strict numerus clausus applies to the study of medicine. This means that the number of study places for, for example, general medicine is extremely limited by the state, which regulates this, and only a minimum number of applicants for studies are admitted. In Norwegian conditions, this can typically mean that of several thousand applicants, only around 100 will be admitted to, for example, the medical faculty at the University of Oslo. These should not only have the best grades from high school, but also points for other activities or extra education. Although the best grade is 6, medical schools often require an average in high school of more than 6.0. This can only be achieved through exceptional results in compulsory and optional subjects and other activities.

The result is that every year there is still a large proportion of smart and talented Norwegian students who have no chance of entering medicine, dentistry or veterinary medicine in Norway, and who must apply for education abroad. It is a simultaneous fact that more than half of all Norwegian doctors have an education from abroad, and not from Norwegian universities. Students have the opportunity to obtain a medical education in English, which is offered by a growing number of especially Central European state universities. The most popular are Prague, Brno, Krakow, Budapest - that is, large and touristy cities. Among them, Martin stands out, which has neither tourists, nor airport and easily accessible location, nor size, but it has quality.

At most universities, the condition for admission to study abroad is a passing entrance exam, usually a very demanding multiple choice test in English in chemistry and biology, which copies the tests to future Slovak doctors and veterinarians, and which according to available statistics is only around half of the registered Norwegian students who pass. Half never get into the studies, the faculty in Martin strictly guards not only the quality of the education and its reputation, but also the quality of the students. 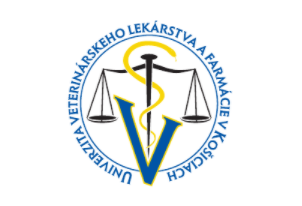 Many Central European universities are interested in good students. Their goal is not only to earn income from school fees, but also to build the reputation of their high-quality educational institution. Many Norwegians are naturally interested in universities in cities that are world-famous, an excellent example is the Charles University in Prague, which has so many applicants that it only accepts the best. Krakow, which has a similar long tradition of cooperation with Norway as Martin, competes not only with the name of Jagiellonian University, but also with the reputation of one of the most beautiful cities in Central Europe. Why then, despite such strong international competition, do many high-quality Norwegian students end up in Slovakia?

Most of the Central European universities have their study facilitator or representative in Norway. Some have only one, others several. Their role is to recruit applicants, promote the university, organize entrance exams, and help students with practical questions before starting their studies. The representative receives a fee from the university for this work.

For example, Jessenius medical faculty in Martin has several representatives in Norway who help it complete the admission process: large private schools such as Bjørknes or Sonor, but also smaller institutions such as Interstudium or Atlantis. Their task is not only to ensure recruitment and a smooth implementation of the admission procedure in Norway, but their essential key task is to convince the student after successful tests to choose Slovakia - and not a neighboring country.

Interstudium has contracts only with universities in Slovakia and the Czech Republic and with different fields of study that do not compete with each other: general medicine, dentistry or veterinary medicine. The aim is not only to prepare the largest possible number of high-quality students who can pass the difficult test, but also to send them exclusively to Slovak or Czech universities. This can be seen very clearly in the entire recruitment and recruitment process, which is otherwise completely free. This representative also organizes free preparatory courses in biology and chemistry for applicants to Martin and Košice, several of which will take place during the academic year. At regular information meetings, candidates are given the opportunity to learn not only about the universities themselves, but also about Slovakia, the country, society and culture.

Successful candidates that the university will offer the opportunity to study must be taken care of continuously. When a student makes an important decision to choose a university, in the face of fierce international competition, it is often considered, for example, that Interstudium offers a free 20-hour language and culture course, Professor Stránsky's scholarship of NOK 20,000, and free translations of educational documentation. Interstudium thus works not only with a commercial purpose, but also with the goal - to get Norwegian students to Slovakia, because this has not only economic, but also a welfare significance for the country.

Norwegian investments in Slovakia and form of academic cooperation

Norway is not only one of the richest, but also the most developed countries, with a functioning welfare system. It includes free education. But since transportation, housing, food, etc. are very expensive for an ordinary university student, the studies at a state college or university also cost a lot of money, despite the fact that the studies themselves are free. In order to even out social differences, so that even the poor, whose parents could not finance it, can study, the state has established a State Loan Fund which, after admission to a college or university, provides a low-interest loan to cover all costs throughout the course. Upon completion and commencement of work, the graduate repays the loan to the state.

Since education in Norway and the EU are equal, Norwegians can also use student loans to study abroad. They will use it to pay school fees and also the cost of living, which is so much lower in Central Europe that it all fits into the annual Norwegian student budget.

In practice, this process means the following: The Norwegian state, represented by the State Loan Fund - provides Norwegian citizens with funding, which they invest directly in the Slovak state budget for state universities - the medical faculty of Jesseni in Martin, or the University of Veterinary Medicine and Pharmacy in Košice, which also has a high number of Norwegian students. These investments amount to almost four million euros per year in terms of tuition fees alone. In addition to school fees, Norwegians rent apartments, shop, eat at restaurants and travel around Slovakia, all covered by the Norwegian state as direct investments as something that contributes to the development of Slovak infrastructure. Estimates show that this is a comparable amount with tuition fees alone, ie several million euros extra per year.

For Slovakia, this means an extra profit - namely the reputation of the country and its universities. In addition, doctors or veterinarians know the Slovak language, understand Slovak culture, and thus become informal ambassadors who will meet thousands of people during their medical or veterinary practice. And thus they also present the high quality of Slovak university education. This more than 20-year-long Norwegian-Slovak cooperation project is therefore one of the most important that exists. Both from an economic and socially beneficial point of view. 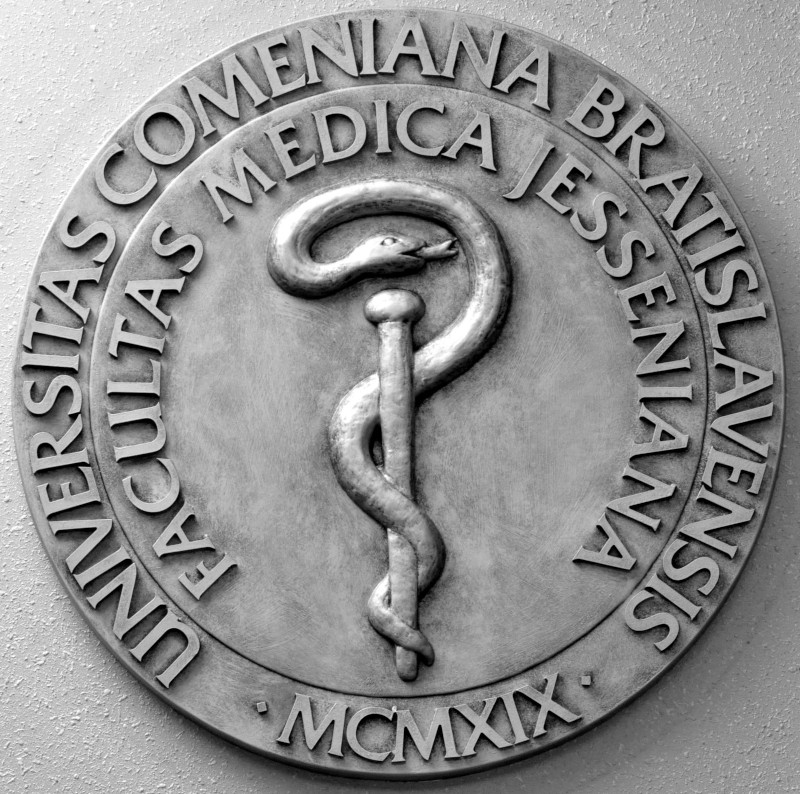 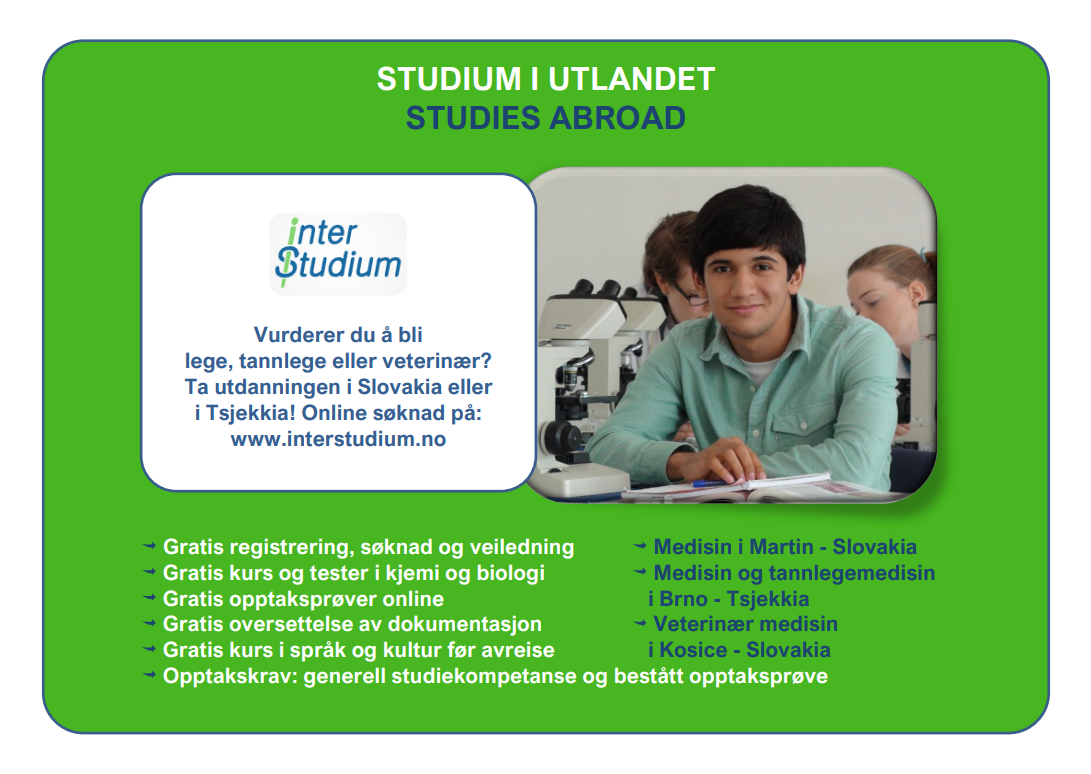 University of Veterinary Medicine and Pharmacy 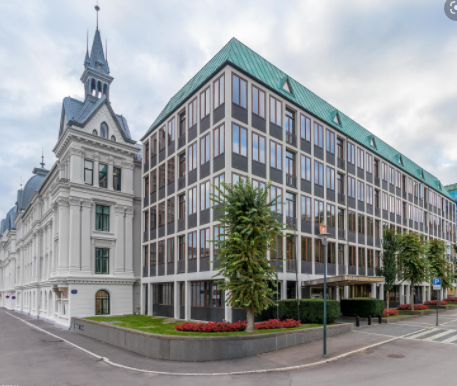 23rd of January 2023 | Trying to win voters' votes with slogans like "let's take the rich", many Norwegian politicians really missed the mark, says the president of the Norwegian Slovak Chamber of Commerce to the Slovak financial newspaper TREND In recent months, Norway has experienced a significant exodus of Norwegian billionaires and millionaires. These have mainly moved to Switzerland, Italy or Canada. The reason is increased taxes. These taxes also increasingly affect the middle class, which previously always supported progressive taxation. Ján Zima explains how this is reflected in Norwegian society. 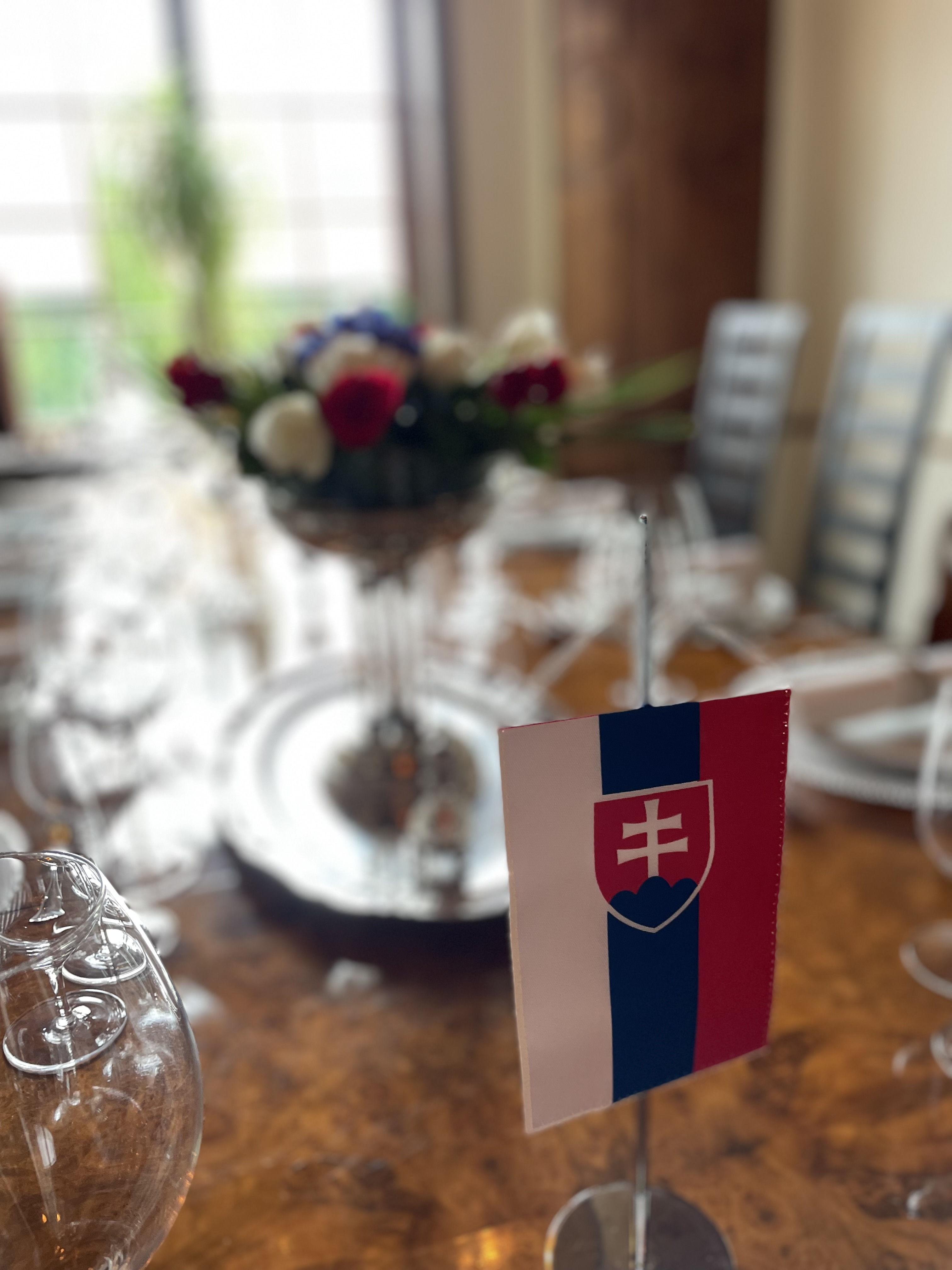 1st of September 2022 | Celebrating Slovakia's national day on 1 September and the 30th anniversary of the Slovak constitution together with investors and Slovakia's friends in Norway. 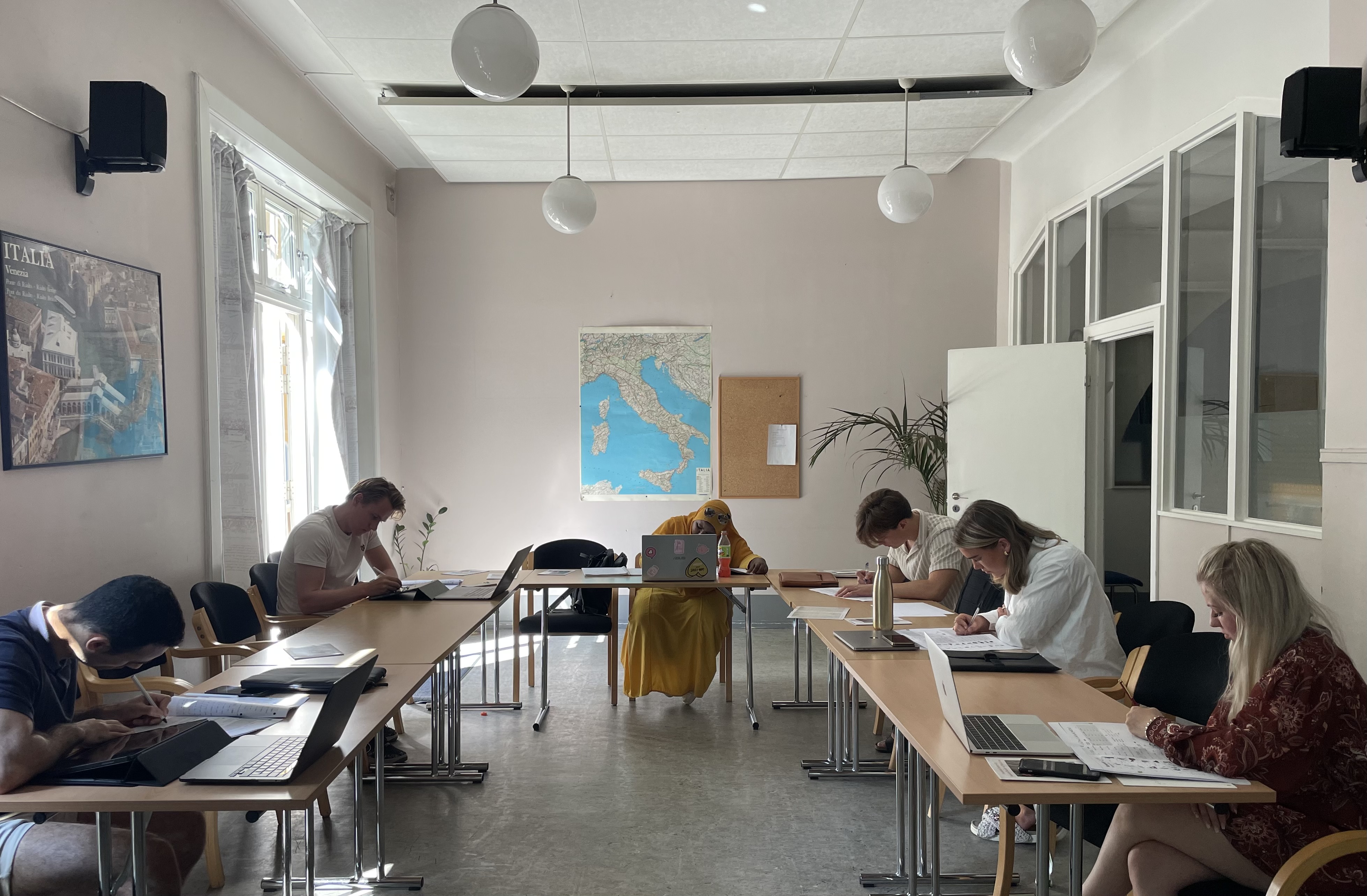 31st of July 2022 | The Slovak Institute in Oslo organized this weekend a course in Slovak language, culture and society for future Norwegian medical students. The course is free and in collaboration with Interstudium, which is recruiting medical studies to the Jessenius Faculty of Medicine in Martin and the University of Veterinary Medicine and Pharmacy in Košice. Norwegian-Slovak academic cooperation is not only useful for both countries, but Norway thereby financially supports the Slovak public education system and infrastructure. 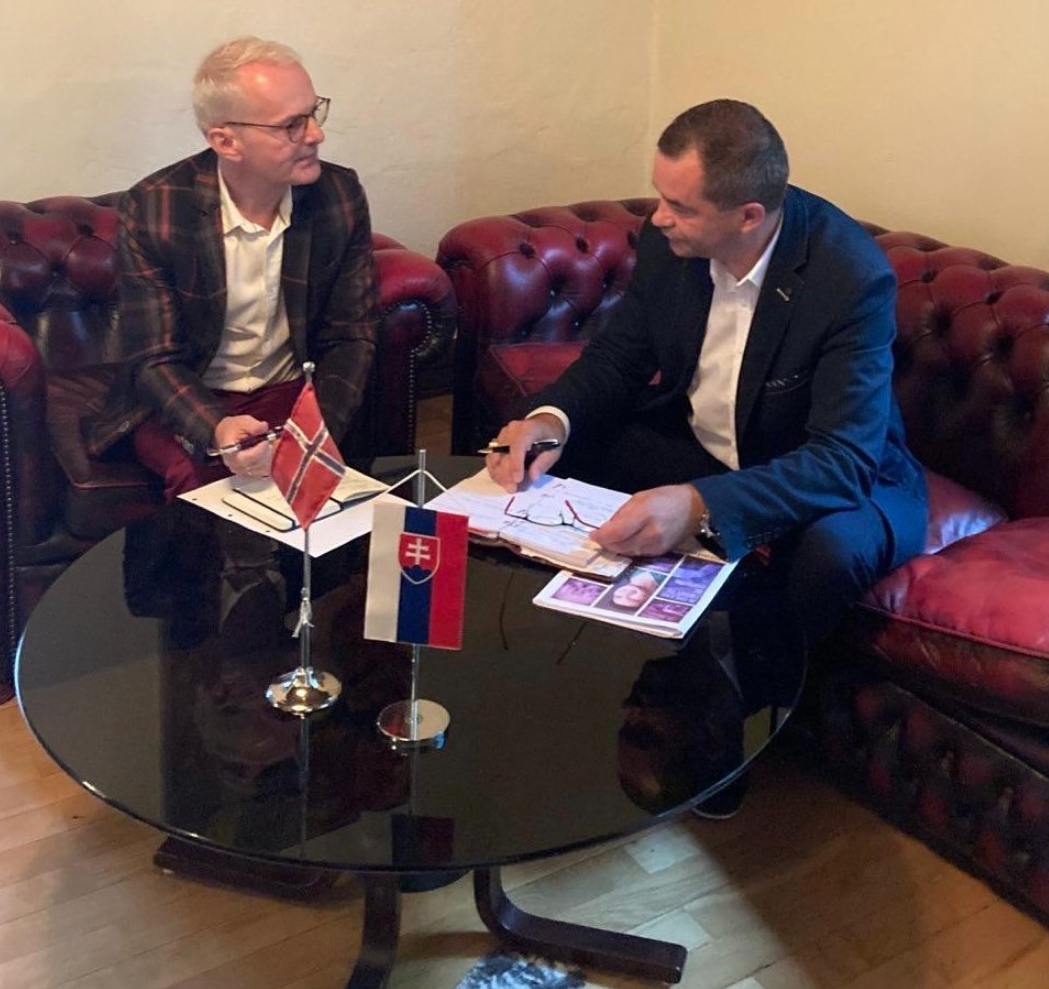 28th of June 2022 | This week, the Norwegian Slovak Chamber of Commerce was visited by the former Slovak Ambassador to Norway František Kašický. We had the opportunity to talk about the current state and development of Norwegian-Slovak cooperation, especially the project of educating Norwegian students at Jessenius Medical Faculty in Martin and the University of Veterinary Medicine and Pharmacy in Košice. During his time in Norway, František Kašický made a significant contribution to the development of this collaboration, which is not only of academic importance, but also represents a strong financial contribution in Slovakia.